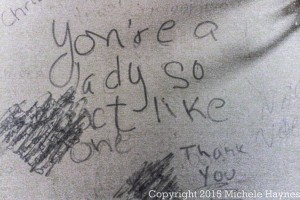 any women rage against the silencing behavior of men.

A huge battle is going on in the House of Representatives, who want to de-fund Planned Parenthood. That is silencing behavior at its worst.

I have written about how abusers silence their victims, stealing a woman’s power from her little by little until she has virtually none left.

But how many of us, women who believe women should be able to use their voices freely, silence other women?

Who decides whose speech should be spoken and heard? Religious leaders, sacred texts, family members, the majority of the people in society, our government, civil rights activists, atheists, feminists, and any other –ists you can think of?

Now we are touching upon morality and the myth of the virtuous woman (thanks Dr. Eva Jones for making mythology relevant to real life).

I was using the restroom in my local grocery store chain a few weeks ago and saw some writing on the wall.

At first I just saw the words, “You’re a lady so act like one. Thank you.”

To be honest, those words offended ME.

What defines what a lady is? Are all adult women supposed to be ladies? Why does anyone need to act like anything that they aren’t?

“…refined, polite woman” is the definition of lady one online dictionary provides.

Are tomboys immoral? Should women all wear dresses and speak in soft, lowered voices?

But then I saw that a lot of the words on that wall had been scratched out. I was subconsciously aware that the larger, symbolically louder, words had been in response to some kind of bathroom graffiti. I didn’t really consider the significance of that response until today.

A woman used that stall in that restroom, saw words written by another woman, and decided that they were not appropriate. She scribbled over them, making them unreadable.

One woman silenced another woman.

The unreadable words had been judged unladylike, and therefore, they needed to be silenced.

This goes both ways folks. If someone scribbles “Jesus loves you!” on the bathroom wall and another woman, who is an atheist, scribbles over it to render it unreadable, the atheist is using silencing behavior.

Women with different value and belief systems, with entirely different world views, silence one another every day. Is it possible that this behavior might be what is hindering social evolution in this country?

I wrote a research paper for an English course over a year ago which addressed free speech on college campuses. Most of us who are old enough are aware of what happened on the UCLA – Berkeley campus back in the 60s. Liberal voices, many from outside the campus, were being used to try to effect change. The powers that be, conservative and defensive of the American Way of Life, decided that those voices needed to be silenced. The fallout from that period hindered open discussion about a lot of important issues for decades.

The creation of free speech zones, banning outside groups on the Berkeley campus, controlling what printed material was distributed on campus and more led to a stand-off and arrests. Years later we have access to classified information that revealed the presence of the FBI on campus due to concerns over communist influences.

Fast forward to the 90s and inversely, traditional (often conservative) speech was limited by way of speech codes (the SCOTUS found these unconstitutional). Liberal influences wanted to change conservative ideologies and prohibit speech that could be harmful to women, minorities, and gays.

The problem with this approach is that by silencing people, unwanted attitudes are reinforced, not changed. They just go underground and form even stronger, sometimes more fanatical subgroups. As the persecuted ones, they are ready to do battle for what they believe is true and good.

The end does not justify the means. In the case of silencing others, the means can backfire horribly.

What is the answer? I have a potential solution.

Someone scribbles something about an explicit sex act on the bathroom wall. The next person who enters the stall doesn’t like the content of the message (sarcasm mode coming: her delicate sensibilities are offended); instead of erasing or scribbling out the offensive speech, she writes something encouraging, beautiful, something that represents her point of view in a respectful manner. Why not?

If one woman’s speech is morally superior to another woman’s speech, this should be obvious to anyone who sees them side by side, right?

[I know that writing on a bathroom wall is actually vandalism. This is a hypothetical situation, and is being used as an example of women respecting the voices of other women. I am not encouraging people to write on bathroom walls.]

I know what you’re thinking: Have you ever tried to convince a man that he was wrong about something?

It is often like hitting your head against a brick wall to try to get through to a man who has it all figured out: authoritative, conservative, deeply entrenched men who believe they were given the keys to the kingdom because of their maleness. Yes, I have dealt with this, a lot!

How many men will turn around and ask the same question? (Lots of male heads nodding assent to this one. Women can be stubborn and intractable, too.)

Again, what is the answer?

Free speech, without the silencing behavior.

When there is no silencing behavior, power is not shifted from one group to another. Each person and group retains their own power. I love this!!!

I mentioned in my last blog post that I am writing a research paper on speech codes on college campuses. While meeting with my professor to discuss my thesis for this paper, I realized, and verbalized, how easy this paper is to write in 2014 as compared to how difficult it would have been to argue my thesis 10 or 20 years ago.

People, groups, students, and professors have gone before me, suffered, paid the price, lost careers, lost degrees, lost almost everything to see that I have the right today to express myself freely on my college campus. Additionally, court case after court case documents what the U.S. Supreme Courts thinks of most speech codes: they are unconstitutional and violate the First Amendment rights of students and faculty.

I am so lucky. I have scholarly source after scholarly source, peer-reviewed and backed up by the SCOTUS to support my thesis. And yet there are still proponents of strong speech codes. This is America, so that is okay.

We all have the history of University of California-Berkeley in the 1960s to show us what happens when the government and college administration attempt to silence the voices of students: it can get heated, students are mobilized, and what “the establishment” attempts to suppress comes out like a volcano erupting. I was shocked to read that not only did the California state government get involved, but the FBI and CIA had infiltrated campus life with the goal of stopping the progress of liberal ideologies. Oh, how misguided our government can be.

You want to know what is the most amazing of all? Even today, in a global political climate with a global economy, the United States of America stands alone in protecting the rights of its citizens to freedom of speech and expression. We are alone. As ugly as it is to read anything homophobic or racist, it is legal to speak of such things without fear of prosecution. I didn’t say there wouldn’t be consequences. No one can eliminate the possibility that a CEO might be pressured to resign after supporting Proposition 8 in California, or that an anti-gay rights celebrity might be fired (though later brought back because of popular demand). This is how we deal with things in America. You have the right to be ugly, and I have the right to call you a racist or homophobic. That is my right. We can fly the Confederate Flag, the American Flag, the “Don’t Tread on Me” flag, and my neighbors can hate me for it and talk about me and refuse to associate with me. I have rights and they have rights.

That’s the thing about free speech: it allows the free exchange of ideas, the critical evaluation of those ideas, and the conclusion that, in some cases, we reject what some ideas represent and convey. We are evolving as a nation. We are becoming more tolerant while intolerance is common. We are more polarized while we often fear speaking up. Moderate voices are accused most of all because they refuse to buy in 100% to any ideology. When one ideology completely rules our land, there is no more hope.

I love my country, and am prouder than ever to be a part in some small way. I look forward to the further evolution of American culture. I had almost lost hope, but this research paper has changed that. As long as we can freely discuss ideas there is hope.

I am writing a research paper on college and university speech codes and how they hinder intellectual diversity. In my many hours of online research I discovered a wonderful website and the following interesting, though sad and intellectually-painful, annual award that goes to those who, above all others, attempt or succeed in hindering free speech in America. Every year The Thomas Jefferson Center for the Protection of Free Expression hands out several of these awards. They go to conservatives, liberals, the ignorant, the scholarly; mostly they go to misguided organizations or bureaucracies who are just somehow confused about what the First Amendment really means. Enjoy or shake your head in disgust like I did — get some popcorn, though, and make fun of some silly people.

Mamas need to not only watch out for naked cowboys in their school libraries, but stop taking photos of their kids taking baths because, according to Rep. Lamborn of Colorado those photos are “inappropriate” at best and child pornography at worst. When grandmother Maria Gunnoe traveled to Colorado to report on coal mining bringing a photo of a five-year-old girl bathing in orange water, it was reported that “Based solely on that staffer’s recommendation, Lamborn ordered that the photo be removed from Gunnoe’s presentation.” Even worse, she was questioned by Capitol Police for over an hour along with that censorship.

May we all survive the erosion of Constitutional rights in this country.

"When people don't express themselves, they die one piece at a time."
-- Laurie Halse Anderson, Speak