Backroads of Connecticut are really fun!

I learned to drive when I was 15 years old. My mom taught me. My poor mother.

I got my driver’s license on my 16th birthday.

I quickly realized that a car meant freedom.

I was the only one in my group of friends who had a car, so we would all pitch in to buy a few gallons of gas to feed the beast and then go as far as we could.

As an adult, my car provided greater employment opportunities. I didn’t mind a long commute. I love to drive.

After moving to the Austin area (Cedar Park to be exact), I bought a tiny Honda Civic. My dad’s Honda Gold Wing had a bigger engine than this little 4-speed. No air conditioning, no power steering, this car was, however, fun!

I drove that car all over the Texas Hill Country. I loved to explore!

I commuted into Austin for work before getting my own place in the Rosedale neighborhood. This car was a blast on the hills and curves when I took the back roads.

When this car bit the dust, I struggled for years to find another dependable car, or one that was as much fun.

A move to St. Petersburg, Florida and me without wheels left me feeling trapped and claustrophobic. I found an old, worn-out Oldsmobile station wagon, a monster with floaty suspension (and another V8). I paid $250 for that thing and loved it. I could load the kids (I was up to four) and go anywhere which we did, often.

When the kids were on the verge of making me crazy (which was quite often), we would pile into the car and go on an adventure. One of my favorite places was across the amazing expansion bridge that connects St. Pete to the mainland and drive around in the rural parts of west Florida or head to Tampa where we had a family membership at the Florida Aquarium. Having a car was necessary for my sanity!

A year or so after that, I bought a Mazda MPV minivan. It wasn’t what I wanted, but it was what my husband wanted me to have. It wasn’t large enough, really, for the kids and stuff.

I never liked that minivan.

When I was separated from my husband the first time, my MPV gave up the ghost for good. I spent a month searching for a replacement vehicle and found a really nice, used Toyota Sienna. My brother-in-law loaned me the money and I made payments for the next few years. This was the first vehicle that I bought driven, pardon the pun, by pure self-determination and not practicality alone. I know, another minivan. But this was the best vehicle I had ever owned — it wasn’t a junker, really old, or a basic model. It was loaded. It drove like a car, had a powerful 3.0-liter V6 and ran without ever giving me any trouble.

I took the kids on a 3,800-mile road trip to Texas and back in the Sienna, much of it on back roads through beautiful Pennsylvania, West Virginia, Virginia, Tennessee, Kentucky and then Texas. Yep, that mini-van represented freedom.

Then my 19-year-old totaled it when someone cut him off on the highway on his way to school.

My next car is my favorite to this day: a 2003 Saab 9-5 station wagon–my first turbo. Yes, I like station wagons a lot. I had kids, a dog, needed to haul my trash to the transfer station and occasional bicycles to and from kids’ friend’s houses. I paid almost nothing for this very used vehicle, but loved it (still have it sitting off the driveway waiting for me to find the title so I can sell it).

This leads me to what I am driving today. I found another used Honda, an Accord this time. It has dings and scratches, and a black interior which I detest, but it is a dependable, decent car. It always starts and always takes me where I want to go.

See, my Saab quit being roadworthy at the beginning of 2016. I went without a vehicle for seven months. A friend of a friend sold me a very sad, poor condition Chevy S-10 pickup to use until I could scrounge up enough money to buy a decent car. Never buy one of these. Total junk. But it allows me to haul off trash and junk as we prepare the house to sell (when it is running, which isn’t often). This truck was all I had to drive until September when my 26-year-old son found me the Honda Accord.

I miss driving my Saab a lot (sport mode)! But I fully appreciate the freedom a dependable Honda Accord affords me.

This afternoon I am using that car to pick up my daughter and granddaughter from the airport in Providence. She will, in turn, use that car to visit all of her friends while she is here.

Knowing that my car is sitting out there in the driveway waiting to take me wherever I desire is glorious. Having wheels is definitely one of my favorite things. 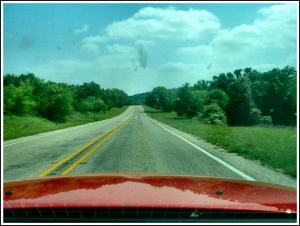 "When people don't express themselves, they die one piece at a time."
-- Laurie Halse Anderson, Speak